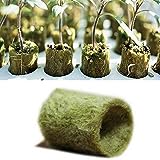 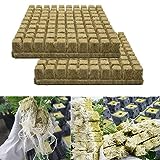 When starting seeds in hydroponic systems, some kind of dense media is required to hold the seeds and prevent them from being washed away. The starter media also has to provide the seed with a moist, oxygenated environment so that it can properly germinate and grow healthy roots. There are several types of starter media available in today's market and everyone has their favourite which they swear by, but for the most part, they all do a pretty decent job.

Rockwool, also known as stone wool, is composed of rock that has been previously melted and spun into fibres. Rockwool is very porous, making it ideal for holding the essential elements required for healthy root development, water and oxygen, however, it naturally has a high pH and so requires soaking in water that is of the correct pH for hydroponics prior to use. There have been some safety concerns raised with regard to inhalation of mineral wool fibres, and there are regulations in place to limit levels of the dust that mineral wool industry employees can be exposed to over the work day. Obviously, gardeners are not going to come even close to inhaling anything like an amount that is likely to be unhealthy, but it is something to be mindful of and make sure it is used in well-ventilated areas, preferably with a face mask.

The dominant player in this space are Growth Technology's Root Riot® cubes which are also pre-inoculated with micro-nutrients to promote rapid root development. Root Riot® cubes out of the box (or bag) will feel wet when squeezed and are ready to use right away unlike other starter media which usually requires pre-soaking before use. Growth Technology is the same company that makes the commonly-known Formulex, Ionic and other plant nutrients that are often used as the nutrient source in hydroponics. In addition, from an environmental standpoint, organic starter cubes also have the advantage of being the most 'green' of the starter media types as they are fully biodegradable.

Sure To Grow™ cubes

Sure To Grow™ are a more recent addition to the growers' market and are composed of the plastic, Polyethylene Terepthalate, better known as PET. PET is the type of plastic that one finds on transparent plastic containers use to package food and drinks and is considered very safe for single use purposes. The typical example of PET is the plastic found on a bottle of water purchased from a shop. Synthetic media, like Sure To Grow™ cubes, tend to be an overall neater alternative to rockwool and organic starter cubes as they don't release any dust or residue to speak of.

If you like the characteristics of Sure To Grow™ media but you are just hesitant to go the 'plastic' route, one thing to remember is that plastic is everywhere both in normal everyday life and in any hydroponic set up - think plastic reservoir containers or plastic piping - so the little bit of PET plastic that your plant might sit in will be a 'drop in the ocean' compared to the abundance of plastic in products around it. Also, contaminants that have been identified as leaching from OTHER non-food grades plastics (ie. Polycarbonate and PVC) are relatively large organic molecules (eg. Bisphenol A (BPA) and phthalates) which are too big structurally to be absorbed by plant roots. Plant roots are capable of absorbing small molecules only, such as water and ions (eg. Calcium (Ca2+), Magnesium (Mg2+), etc) so any as yet unknown organic substance that MIGHT (and we stress 'might'!) be leaching into the nutrient media from PET plastic is not going to be absorbed by the plant roots. However, this is not the case for other metal ion contaminants, like lead (Pb2+), that might come from unpurified tap water, which DO get absorbed by plant roots and is another good reason to use reverse osmosis water for growing. Unfortunately, there is some indication in the literature that aged PET plastic that has been exposed to hot environments can leach very small quantities of the element antimony (Sb) which could theoretically be absorbed by plants. Whether this would be a good enough reason (since hydroponic environments are cool in temperature, and since we are exposed to so much PET food packaging everywhere else in our lives anyway!) to avoid Sure To Grow™ media is debatable.

Oasis Horticubes® are another type of synthetic polymer starter media, this time, a type of foam - think 'floral foam'. As with other starter media, it is very porous and is capable of holding optimal quantities of water and oxygen needed for good plant root development. Like other synthetic starter media, Oasis Horticubes® are less messy than the more natural types of starter media (namely, rockwool and composted organic cubes), and they are sterile - so no chance of pathogens coming along for the ride - but once again one has to decide whether they are comfortable with starting their plants in synthetic polymers - they are certainly safe, so what it really comes down to is individual preference.

Which nutrient media to use for hydroponics...