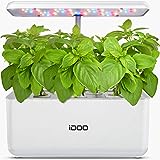 Many of us aspire to grow our own food but often don't want to go through the hassle or don't have the space to put together the whole indoor setup of a grow tent, grow light, hydroponics, and the like. But that doesn't mean we have to give up on the idea. Recently, there has emerged a new class of indoor garden that is much smaller and easier to manage allowing almost anyone to grow some of their own food for the dinner table. In fact, the garden can sit right on the very same table! These gems are the indoor herb gardens that are self-contained, low maintenance units that usually come with an integrated grow light, and which have become more and more popular with the non-green-fingered consumer.

There are two companies that currently dominate the niche, Miracle-Gro (which almost everybody has heard of) and a newer firm, Click & Grow, which arrived on the scene with its first consumer product in 2011. In addition, there are a couple of other competitors that are also worth a mention as their units incorporate some unique features. In this article, we will review the different indoor herb garden kits that are available on the UK and US markets and hopefully, simplify your buying decision if you decide to go down this more consumer-driven route.

When it comes to indoor herb garden kits, the company that has the most financial muscle in this space, both in the US and in the UK, is Miracle-Gro with its AeroGarden brand. They have a family of countertop hydroponic herb gardens that cater to a broad range of consumer requirements. Their earlier designs use CFL lighting but their more recent units have seen the introduction of LEDs making them more energy efficient. In these LED units, the company has elected to use predominantly red and blue LEDs, which is a real positive since a lot of the colour wavelengths in white light are not used by plants (the inclusion of white LEDs in the design may have been more necessary from an aesthetic standpoint). The stated LED life expectancy for the AeroGarden herb garden is 20,000 hrs which is a decent 3-4 years if used non-stop for 16hrs a day, and is much better then the 6000 hrs expected from the CFL bulbs. The light height on the AeroGardens is adjustable, so the lighting can be kept at all times just above the plant canopy to maximise light exposure. The AeroGardens also make use of hydroponics, which has been discussed in depth elsewhere and which is a big plus as the technique is generally accepted to be much more efficient for plant growth then equivalent soil set-ups.

As for what you can grow in their AeroGardens, the company provides 'Seed Kits' for a variety of different plants including:

You can also get a 'Grow Anything Seed Pod Kit' which allows you to use your own herb or other plant seeds within the AeroGarden kits. However, even buying these refills for the unit is not always necessary if you don't mind doing a bit of DIY. Get hold of some small plastic cups that will fit in the refill receptacles (you will need to make some holes in the bottom), Rockwool and some seeds and you can make your own refills.

Seeds germinate within 7 to 14 days and are usually ready to harvest within six weeks, although most people will usually harvest a few individual leaves at a time on a regular basis as the plants grow, allowing them to continually produce edible herbs over several months. As the plants grow taller, the LED light hood on this herb grow light box is continually raised by gently pulling up on the rear light post. Water and nutrients are added at the beginning of the grow and then alerts are issued every two weeks for more nutrients to be added, while the water level is monitored by the AeroGarden and an alert is issued when the water level reaches a critical low level (however, it is recommended to keep the water reservoir topped up as much as possible and not wait for the water level alerts before refilling the tank). The whole AeroGarden unit has a 28cm x 28cm footprint, works on 240V and, in the UK, comes already fitted with a UK plug.

Overall, the AeroGarden Harvest and Harvest elite are excellent compact hydroponic systems with everything you need to grow indoor herbs quickly and vigourously. However the overall criticism most users have about these indoor herb gardens, and AeroGarden kits in general, is their high initial cost to purchase and the high costs to replenish the seed pods and the patented grow nutrients, which do not make much financial sense when directly compared to purchasing herbs at the local grocery store or even growing your own herbs in the back garden. However, one does have to remember the cost of the system comprises not just the parts that make up the system but also the intellectual property of the designs as well as the effort that goes into working out the ideal plants and growing conditions for the system. In addition, herbs also grow much faster in AeroGardens than they do in equivalent soil setups, as well as being pest-free, while at the same time producing edibles that have improved nutritional content. AeroGardens are also ideal gifts for loved ones and they often end up as talking points at social events, all of which ultimately contributes to the justification for their high price-tags.

NB: It should be noted that the AeroGarden Harvest and Harvest elite models available in the UK are the 2015 designs. Since then, AeroGarden has moved onto 2016 models that are currently only available in the US. The only real difference between the 2015 and the 2016 models is in the control panel, with the 2016 model upgraded to a small LCD screen instead of the all-pushbutton panel found on the 2015 model (as shown in the images below). Functionally however, they are almost identical.

The next biggest player in this space, and direct competitors with MiracleGro's AeroGarden division, is Click & Grow which offers a slightly smaller range of products for the consumer. Their current flagship model is the Smart Herb Garden which is a small table-top indoor garden kit with a grow light that holds 3 individual plant pods and has white LED grow lights to provide enhanced lighting for the herbs or other plants. As with Miracle-Gro AeroGardens, the LED light height on the Click & Grow indoor herb garden is adjustable but only to three different positions, but this is sufficient for vigorous sprouting and growth of the herbs. Overall, this is a much simpler unit than the larger and more sophisticated AeroGarden competitors but it is also less expensive. Click & Grow also offers a 'Smart Flowerbed' range (also often referred to as a Smartpot) which is essentially the same as the Smart Herb Garden but without the integrated light. Annoyingly, the seed 'refills' are not interchangeable between the two ranges. Unlike the Smart Herb Garden with its integrated lamps, the Smart Flowerbed is, for the most part, designed to be placed on the window sill or an equivalent brightly-lit place as the plants will be using natural light to grow. The exception to this is the Strawberry version which comes with a light (which can also be bought separately to be used with other Flowerbed configurations), since some plants require additional lighting for them to be successfully grown. Ultimately, however, the key to getting good growth from Click & Grow's gardens lies in their synthetic 'soil' composition. This has been specifically formulated to ensure that nutrients are available for the optimal growth of each plant type throughout its life cycle.

As for what you can grow in the units, they offer a similar range of seed 'Refills' as the Miracle-Gro AeroGarden system. They include:

An interesting point to note: the company will be soon introducing its Click & Grow Robot Garden. This new unit is scheduled for release in October 2015 and is a much larger scale concept for growing your own food in an indoor garden. Unlike its smaller scale counterparts, this hydroponic garden comes as a full-size mobile countertop beneath which plants and a herb or two can be grown on illuminated shelves. This represents the future direction of indoor herb gardens as they become more and more integrated into the home.

If you are looking for a less sophisticated option for the indoor herb garden, a kit from Garland (the same UK company that sells the heated seed propagators described elsewhere) has come up with the Grow Light Garden. This small grow light-containing indoor garden kit is much simpler than the AeroGarden and Click & Grow competitors. The integrated T5 fluorescent light (two 24W tubes) on this indoor herb garden from Garland has to be manually switched on and off (although this can easily be achieved with a plug-in timer), no electronic warnings are given when water or feed levels are running low, and there are no special soil or nutrient formulas to optimise plant growth. However, like its more sophisticated brethren, the lamp can be adjusted vertically to match plant growth height. In essence, the Garland Grow Light Garden is more of a convenient package in which to carry out your own version of indoor herb gardening without the restrictions of its competitors. Consequently, one can grow anything one likes in the unit which can also hold a lot more green compared to either of the individually-cultivated plants found in Miracle-Gro's AeroGardens or the Smart units from Click & Grow.

Back to the Roots Water Garden

Now if you like the idea of an even more natural garden (and you like having fish too), then you might prefer the idea of aquaponics where plants use fish waste as fertiliser while the fish rely on this 'filtering' of their water to stay healthy - not unlike what happens in the wild really. Professional aquaponics set-ups are very efficient systems, however, getting the right balance between fish and plants is often very challenging. But once you get the system right, all you have to do is feed the fish and harvest your crop (if edible). Back to the Roots Water Garden, also known as the AquaFarm, is an attempt to bring a consumer version of aquaponics to the home - originally debuted on Kickstarter in 2013 - it is now available through Amazon. However, don't assume the system will work straight out of the box - let's face it, aquaponics is hard to do - and with the introduction of an animal element to the indoor herb garden means that there are double the number of variables that can go awry when growing plants. Although a really neat piece of kit, be ready to have to optimise various elements within the system. In addition, because of the lack of an integrated grow light, currently only certain herbs can be successfully cultivated in the unit, although the company is looking into adding grow lighting in the future. Anyone who has ever owned a fish tank will also appreciate that cleaning of the fish tank should become unnecessary, but once again, this is difficult to do in practice and people have found success through the addition of stronger pumps or the introduction of freshwater snails.

As for what you can grow in the AquaFarm: