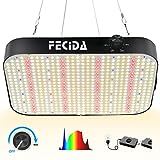 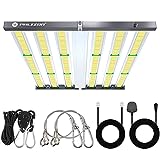 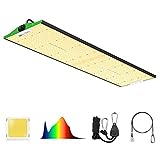 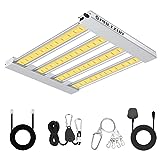 Here is where we include the background information on plant photosensitive pigments that is often used to make conclusions on what light wavelengths to include in an ideal LED grow light. For most of you these details are of less interest and you probably just want to know what characteristics to look for in LED plant lights rather than the reasons why they should be included. However, for the more scientifically-minded, we're sure you will appreciate the greater depth behind the conclusions. In general, LED plant lights have to concentrate on catering to the lighting needs of the following photosensitive plant compounds:

Chlorophyll A - Chlorophyll A is one of the main photosynthetic pigments found in green plants and absorbs light at a 660nm (red) peak wavelength in the visible light spectrum which is vital for plants. It also has a second peak in the blue region of the spectrum at around 400-450nm.

Carotenoids are a family of pigments that are subdivided into the carotenes and the xanthophylls. They serve two key roles in plants: they absorb light energy for use in photosynthesis, and they protect chlorophyll from photo-damage - their absorption appears to be optimal in the blue regions of the light spectrum within the range of 400-500nm.

Cryptochromes make up a sub-family of flavoproteins that have a variety of plant functions, such as maintaining plant rhythms and photo-tropism. They absorb light from two regions of the spectrum: blue light (400-500nm) and UV light (sub-400nm range).

Phototropins, like cryptochromes, are another sub-family of flavoproteins that are primarily involved in, you guessed it, photo-tropism, but they also serve other functions in plants as well. Absorption of light occurs at blue wavelengths and they may also absorb from the UV region as well. Although their UV absorption peak is much less defined, protein analysis indicates that they contain a domain in their structure that is responsive to UV, so it is likely to play a role too. Based on this information, we should expect to cater to both its blue (400-500nm) and UV (sub-400nm) wavelengths.

Finally we have the phytochromes which absorb in the red (Pr) and far-red (Pfr) portions of the light spectrum. So we need to cater to 600-700nm (red) and 700-800nm (far-red) wavelengths. Phytochromes appear to have several different roles in plants but one role in particular, that of shade avoidance has been well documented: Far-red light has a greater ability to pass though leaves than does red light. As a result of this, leaves lower down receive a higher far-red light-to-red light ratio compared with leaves that have an unobstructed view of sunlight. Consequently, this acts as a signal that they are being overshadowed by other leaves and they will move/grow to try to get a better 'view' of the available sunlight.

As you can see from the table, there are quite a few photosensitive pigments found in plants, each participating in different plant functions. We think pretty much every function on the list is desired, so we really should try to cater to them all. Moreover, we must not forget that scientists don't yet know the 'full story', so it is entirely possible that they could discover, later on down the line, that these pigments are playing other critical roles in plant physiology.

White LEDs and why we might want to avoid them...