It is often the case that one of the major reasons for wanting to grow plants indoors is to be able to cultivate them out of season. Getting hold of the desired seedling starts from your local gardening store or garden centre can be more difficult during these times, since these establishments tend to cater to the outdoor gardener, preparing seedlings at their most commercially-fruitful (excuse the unintended pun!) times of the year. So how do indoor gardeners get growing at other times of the year (like now for instance, in November)? One of the answers to this question is to start from seed.

​Getting seeds to germinate is not always as easy as it sounds and it can almost be an art form in which experience is invaluable. However, it also helps to understand the science too. Plant seeds often germinate optimally in environmental conditions that are different from those of the average day. In general, seeds most often germinate maximally when moisture is abundant and at higher than normal temperatures, but seeds from different plant species can also differ in their environmental requirements for germination, so it helps to know the ideal conditions for your particular seeds.

​So hopefully you should now have an idea of what conditions your seeds like best, but what's the best way to give them what they want? A seed propagator is often used to control these environmental variables (particularly temperature) in an attempt to provide the best conditions for seed germination. There are several types of seed propagators available to the average user, but they mostly all fall into one of four categories:

​These are glorified covered seed trays – the cover is usually made from a transparent plastic and is there to reduce drafts, helping to maintain the temperature inside the seed chamber at a slightly higher temperature than the surroundings. The cover also serves to reduce moisture evaporation from the plant chamber reducing the chance that the soil dries out too much and inhibits seedling growth. These propagators are the least expensive but need to be placed in areas of the home where temperatures are conducive to optimal seed germination.

​An unheated propagator popular with growers today is the self-watering Garland GAL44LSW 24 Cell Propagator. The Garland GAL44LSW is an ideal propagator for the less experienced grower who has a hard time getting seeds to germinate as a result of either overwatering their seeds or by not keeping the soil moist enough for them to take root. The Garland GAL44LSW propagator overcomes the need for judging how much water needs to be added for maximal seed germination by using a water reservoir and a capillary mat that wicks up the water into the seed-containing soil when it is needed. The propagator is also good for those who are not always able to keep a close daily eye on their growing setups (think allotments!) or are away for a number of days, as the water in the reservoir can self-water the soil for up to a week or two before it needs replenishing.

​Quality-wise, the Garland GAL44LSW self-watering propagator is, for the most part, made of sturdy injection-moulded plastic, although the cover is much thinner and even a bit on the flimsy side. In addition, the fitting of the cover to the main body is not as snug as one would have liked and consequently is liable to being blown off if used outside in windy weather.

​A couple of users have noted that the Garland GAL44LSW propagator’s cover has a shallower depth to it than some growers prefer, meaning that seedlings only have limited headroom to grow before the lid has to be removed. However, good growing practice requires that seed chambers are vented once seedlings have sprouted and reached sufficient size, in order to reduce humidity and better facilitate plant transpiration, which in turn allows nutrients to be more efficiently transported up into plant leaves. Indeed, since the propagator is self-watering, growers need not worry as much about seedlings drying out once the cover has been removed, and only need to monitor the water level of the reservoir.

​Overall the Garland GAL44LSW 24 cell self-watering propagator is an excellent economical seed propagator that works very well for a variety of different seeds and makes germinating seeds a lot less work-intensive while at same time going easy on the grower’s bank balance.

​​The Garland series of heated propagators are particularly popular with the home user partly due to their aesthetically-pleasing appearance, but also because they work well too. The lower heated tray contains carbon fibre heating elements that heat the seed trays that sit atop of it. The Garland heated propagator tends to heat the soil to about 8​℃ above the ambient room temperature although there can be a couple of degrees variability across the surface of the heated tray (the centre being slightly warmer than the periphery). Although a small amount of heat is wasted since the heating tray is not covered, the unique design allows for greater flexibility when controlling the seed chamber humidity since each seed tray can be vented individually (using the red swivel tab located on the cover). Once the seedlings appear, the covers can be removed but the soil should then be monitored daily since ​it will dry out quickly if left on the heated tray.

On a more personal note, using the Garland Fab 4 Electric Propagator, we have so far germinated a number of seeds successfully in a 19​℃ room (soil temperature measured to be 28-33​℃) under 12 hours / day of LED or CFL lighting ​or just with natural light.

NB: Whether lighting had an effect on germination is debatable but an interesting observation was that first appearance of all types of seedlings tested so far have occurred under LED lighting as opposed to under CFL lighting, but this was usually a difference of a matter of hours. In addition, some seedlings under LED lighting appeared after some of the seedlings under CFL lighting so it is too early to say whether the types of lighting makes a difference to seed germination.

​​For some plants we further investigated the difference between using a unheated propagator versus a heated one ​on seed germination. Seeds from different plant species were incubated in identical conditions in one of two Garland Fab 4 electric propagators, one was kept switched off while the other ​switched on with both of them exposed to natural sunlight. Seeds were placed in organic ​Root Riot® grow cubes surrounded by inert clay pebbles (Hydroton) as physical support. They were observed over the course of two weeks in order to compare the difference heating makes on the time to seed germination.

Luffa seeds & Cucumber seeds - these were obtained from friends in the Middle East who grow their own Luffa and Cucumber plants. The Luffa seeds have proven very robust with 100% of them germinating very quickly in the Garland Fab 4 propagator, albeit not all at the same time. The Cucumber seeds showed a similar level of success, growing strongly under LED lighting.

Cherry Tomato seeds - these were obtained from amazon.co.uk and have pretty much performed spectacularly. They are advertised as 40 seeds for a very competitive price, but in reality, you get something like a couple of hundred. We got the feeling that they just bunged a spoonful of them into the sachet without counting. In addition, they bundled in another separate sachet of Safflower seeds as a gift - a nice touch. Planting 8 of the cherry tomato seeds in the Garland Fab 4 propagator led to germination of 7 of them by the 4th day (with most of the seedlings appearing on the 3rd day). Since then they have grown strongly under LED lighting.

​Curly Kale  seeds - these seeds were obtained from Amazon and have performed ​very well, germinating 100% of the time, even after ​two years of storage. ​As one might expect from any seeds, germination time was variable ​from individual to individual but the overall time that the ​majority of these Curly Kale seeds took to germinate ​was approximately halved by using a heated ​propagator​. In these tests, ​Root Riot® organic starter cubes were used but these seeds are undoubtedly robust enough to be germinated in a range of different media. As for growth into adulthood, the seedlings grew strongly with some of them being transplanted to a hydroponics system for full-term growth in a conservatory where they also performed very well.

​Thermostatically-Controlled Propagators in the UK 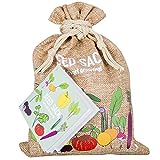 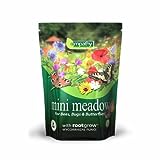 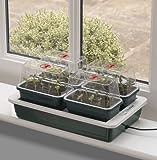 Garland Large High-Dome Propagator, Green, 37x22x19 cm
View on Amazon
We use cookies to ensure that we give you the best experience on our website. If you continue to use this site we will assume that you are happy with it.OkRead more