So you’ve got the hydroponic system all assembled and ready to go. What you need now is to decide what you are going to feed your plants. There are several different nutrient solutions available for use in hydroponics and there is no one brand that all growers agree on as the best. This is probably not surprising since they all have to contain the same 14 essential nutrients (nitrogen, potassium, calcium, and magnesium as well as a slew of other ‘trace elements’) at the minimum concentration that plants require for optimal growth. Other than some leeway on nutrient concentrations, companies are naturally limited in how much they can modify their formulation from the basic formula needed by plants. Of course different plants species prefer different concentrations of nutrients for optimal growth, and different stages of their life cycle can also require some nutrients more than others, so if you are growing a particular crop, researching what others have used for successful growth of that particular plant species is often the best way to go. If that comes up empty, then it really comes down to trying a few different brands in a controlled manner to identify what works best for you - as with many aspects of home growing, getting the best results is often down to quite a bit of trial and error.

​A number of nutrient formulations come in one of two water hardness variations, the 'default' form that is used with soft or purified water, and a hard water nutrient formulation which is used with water (often tap water) where natural minerals are still present. Using hard water for nutrient solutions complicates the growing process as water hardness levels can naturally vary over the year. Also, comparing results with other growers in different locations in an effort to improve yields becomes much more difficult if the water that fellow growers use is significantly different from yours. In addition, tap water often contains low levels of undesirable contaminants that may not be doing you any harm by drinking it but are likely to be reducing the overall health and growth of your plants. If you read some of the other pages of this website, then you will know that purified reverse osmosis water is the preferred option for home growers, and that means using soft water nutrient formulations.

​Keep Out of the Light

​It should be remembered that although your plant needs ample quantities of light to flourish, the opposite is true of plant nutrient solutions which are sensitive to light. Ultra-violet (UV) light (a constituent of natural light) has a tendency to break down some of the chelated forms of nutrients which can bring them out of solution, and which means out of reach of plant roots. Therefore, it is very important to keep nutrient solutions in the dark as much as possible. Another reason to keep your nutrient solutions away from light is that exposing them to light while growing your crop, encourages algae growth which will use up the minerals in the nutrient solution for their own growth and reduce what's available for your plants. Not what we want!

​Many nutrient solutions come as a multi-part formula (eg. Canna's Aqua Vega comes as 2 separate bottles labelled 'A' and 'B') which together make up the complete range of nutrients for plant vegetative growth. The reason why they come as a multi-part formulation is because the much higher concentrations of nutrients in undiluted stock solutions, would encourage some of the nutrients to react with each other and create chemical forms that are inaccessible to plants. So by keeping certain high concentration nutrients separate until they are in their diluted forms ensures that plants have access to the full benefit of the nutrients you are giving them. This is also the reason why it is very important to add in one stock solution at a time to the final working volume when making up your nutrient media. Never add concentrates together before diluting them!

For the more amateur grower (although many professionals also use it for plant propagation), an extremely versatile and effective nutrient solution is Formulex made by the well-known hydroponics company, Growth Technology. The great thing about Formulex is that it contains all the nutrients that most plants need in one package and so can be used alone in a variety of systems (including soil) and on a range of different plant species producing excellent results. It has been buffered for pH (if you have forgotten your chemistry, pH is the measure of how acidic or alkaline a solution is), which means that when you add it to the water in a hydroponic system, the pH is automatically adjusted to pH 6, ideal for most plants which require a pH in the range of 5.5 to 7. This 1L bottle will make 100L of nutrient solution, and since the nutrient solution is usually continuously recycled in a hydroponic system, it will last quite a while before you need to get a replacement especially if you have a smaller set-up.

​​Ionic Hydro is another product from Growth Technology, but in this case has been specifically formulated with hydroponics in mind. Like Formulex, it is a 1-bottle formula that contains all 14 nutrients that plants need and pH buffers your nutrient solution (once it has been set to the desired pH). However, unlike Formulex, which comes as a single universal formulation, Ionic Hydro exists in a number of forms depending on plant lifecycle and water hardness.

First off, Ionic Hydro comes in a 'Grow' variation that promotes vegetative growth over fruiting and flowering, and an 'Ionic Hydro Bloom' form that does the opposite, promoting the production of flowers over foliage growth. Secondly, Ionic Hydro also comes in a 'default' soft water variation, and a hard water version (marked 'HW') for use in areas where the water supply is pre-loaded with naturally-occurring minerals. Of course, reverse osmosis-purified water is always preferred when making up hydroponic media in order to have a greater measure of control over growing conditions and to eliminate many of the other undesirable 'contaminants' found in tap water.

Another type of hydroponic nutrient formula that falls under the Ionic brand is Ionic Coco which is targeted at hydroponic setups that use Coco Coir as the inert hydroponic media. Like its Ionic Hydro sibling, Ionic Coco comes in both a 'Grow' variation for vegetative growth and a 'Bloom' form for the flowering and fruiting stage. Note that as with Ionic Hydro, Ionic Coco is not a multi-part formula that one adds together to make up to the working concentration, but instead exists as a single-bottle formula of which there are variations that are supposed to be used at different life cycle stages of plants.

Another popular brand of nutrient solution available in the UK is produced by General Hydroponics. General Hydroponics is a well-established US company which has been developing hydroponic nutrient solutions and other hydroponic kit for over 3 decades. Their main nutrient solutions belong to the Flora series (FloraGro, FloraMicro, and FloraBloom), with FloraGro and FloraBloom specially formulated to promote a particular stage of a plant’s life cycle, however, don’t be confused, they are in fact all used together throughout the plant life cycle, just in different amounts at different stages (see chart to the right), so you really need all three solutions from the outset.

The reason for keeping them as three individual parts is not to charge us more for each bottle (at least we don’t think so! :-)), but it is to prevent minerals in the different solutions from reacting with each other and forming insoluble products that are inaccessible to plants. It is also the reason why the concentrated solutions should not be mixed together prior to adding them to water when making up the nutrient solution, as they will form these insoluble minerals more readily at their higher concentration. FloraMicro is the foundation, it’s used during both grow and bloom cycles. FloraGrow is the nutrient that is used more during a plant’s vegetative growth phase, and higher concentrations of FloraBloom promote fruiting and flowering. As with many other nutrient formulas, all Flora series solutions are pH-buffered, so for the most part are 'maintenance-free' once diluted in water and pH-adjusted, but the company does recommend that pH is monitored during the grow.

The Flora series were created by a former NASA senior chemist in collaboration with scientists from the University of Davis in California. General Hydroponics continues to refine the Flora nutrient solutions testing out the latest scientific discoveries, so you may find some bottles of the same name look different from each other depending on when they were produced. Fear not though, General Hydroponics is not making radical changes to a formula that has worked well for the last 30 years and so are all pretty much the same thing (from the home grower’s perspective). One final point, be sure to get the correct FloraMicro which comes in two forms: for soft water and for hard water, which depends on what type of water you will be using to dilute them.

Aqua is the brand name for the nutrient media used in recirculating hydroponic systems. It is produced by the growing media company, Canna, which produces a number of plant growth-related products marketed worldwide. Since recirculating hydroponic systems like NFT or Flood & Drain are used most in today's home growing setups, it may seem a little odd to have named it Aqua as opposed to Hydro. However, Canna already has a product called Hydro (see below), and it is a nutrient media that is used in drain-to-waste hydroponics systems which are more commonly used by commercial systems.

Each Aqua formulation comes as two separate bottles (labelled 'A' and 'B'), that are diluted one at a time into the working volume of water, to make up a complete nutrient formula for plants. In addition, as with other nutrient media, Aqua also comes in a variation designed to promote vegetative growth called Aqua Vega, while the Aqua Flores variation promotes heavy flowering and fruiting.

NB: Even though the Aqua formulations are designed for recirculating hydroponics does not mean that they cannot be used in other types of hydroponic systems. We have used Aqua Vega to successfully grow a series of vegetable plants using the non-recirculating Kratky hydroponics system.

Canna's Hydro was one of the company's first products and was designed for non-recirculating hydroponic systems where the run-off from plant feeding drains to waste or to some sort of reprocessing facility. Commercially grown tomatoes, cucumbers, and other large plants often use this type of hydroponics, but such systems are uncommon amongst home hydroponics setups mainly due to the potentially high level of nutrient media wastage when used without some sort of reprocessing setup. As with Aqua, Hydro comes as a Hydro Vega form designed to promote more vegetative growth over flowering while the Hydro Flores variation promotes heavy flowering and fruiting.

Like Growth Technology's Ionic Coco, Canna also produces a nutrient formulation that is specifically designed for use with the hydroponic substrate, Coco Coir. Coco contains humic acid and fulvic acid, the degradation products often found in soil and thought to promote nutrient absorption by plants. Like Aqua and Hydro, Coco comes as a 2-bottle formula that needs to be appropriately mixed into the final working volume to provide plants with all their nutrients. Unlike Aqua and Hydro, however, Coco only comes in a single form factor that is used for all stages of a plant's lifecycle (vegetative and flowering). This is due to the unique properties of Coco which makes it unnecessary to adjust the nutrient formula at different plant growth stages.

​NEXT:  pH meters for Hydroponics... 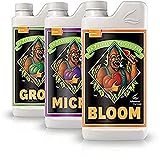 Canna Coco 1L A&B Bottles Set
View on Amazon
We use cookies to ensure that we give you the best experience on our website. If you continue to use this site we will assume that you are happy with it.OkRead more