LED grow lights: What to look for

0 Comments
LED grow lights: What to look for

So what colours of light should an LED grow light have?

The research into ​the question of what are the ideal LED grow light specs has been confusing to say the least and because of this the products on the market have varying combinations of LED colours and intensities. We think this goes a long way to explaining the differing opinions and experiences people have had with respect to the effectiveness of LED grow lights on plant growth. We think we can make more sense of what makes a good LED grow light by first analysing what wavelengths plant pigments are absorbing.

We debated on whether to include all the detail about plant pigments in this article but ended up deciding that for most people, the scientific information would be sleep-inducing, even though we find it quite fascinating knowing what's going on inside those leaves! So, instead we created a separate page to summarise the more scientific findings here. Suffice it to say, that so far, all the pigments identified in green plants absorb light wavelengths in the UV, blue, red and far-red regions of the light spectrum while ignoring (or avoiding!) the green and yellow regions. This makes sense from the standpoint of what we see: plants are green precisely because they don't absorb these wavelengths, instead reflecting them back at us (note: we only see the reflected yellow / orange colours in the fall when the green chlorophyll has degraded).

So from the plant pigment absorption information, we can deduce that the ideal LED grow light should have the following light sources:

NB: one key point to keep in mind is that plant photosensitive pigments typically absorb light over a narrow band of wavelengths around a central peak. Therefore if LED wavelengths do not exactly match the ideal wavelengths required, for instance let's say we have 650nm LEDs in our grow light instead of 660nm ones for red light, that's still OK since plants will likely absorb sufficient amounts of 650nm light to equal their 660nm light requirement, so we have some leeway.

What colours of light do we get from traditional grow lighting?

​How do the electric lighting systems that we use now stand up to the lighting needs of plants? What wavelengths do they emit? Below is a table detailing the colours/wavelengths that are emitted by sources of light currently used by horticulturalists and indoor gardeners:

​Clearly, most of the current lighting systems in use today don't cover all the wavelengths that are required by plants, or if they do, they also include wavelengths that are not required and possibly detrimental to plant growth. One way growers get around some of these issues is to use different combinations of lights, for example, High Pressure Sodium (HPS) in combination with Metal Halide (MH) will cover the full spectrum but this has high cost and low life-expectancy issues. The HPS / MH combo, like the full-spectrum fluorescent lighting, also emits in the yellow and green light wavelengths, which as we have said before, would be preferable to avoid. So, our current electric lighting systems appear to be both inefficient and more costly, and may even be preventing us from reaching the full potential of our gardening ambitions! So there is certainly an argument for using LED grow lamps if we could only just get the lighting characteristics right...

A word about White LEDs...

​We've also seen some LED grow lights containing white LEDs which appear to be included in the light fixture to provide the 'other' important wavelengths in addition to the essential red and blue ones - how effective they are is debatable but there are only two common ways to generate white light from LEDs, neither of which seems to sufficiently cater to all the wavelengths that we've outlined and may even be producing lots of the undesired green/yellow light. We detail our findings on how white LEDs are made here and why we think they should NOT be part of your LED grow ligh​t specifications.

What else should you be looking for in an LED grow light?

OK so now that we know what LEDs should be present in our ideal LED grow light, we can go ahead and press that 'pay now' button and begin fantasising about how impressed our neighbours will be with our exceptionally green fingers, right? Not so fast.... there's more...

​So what to look for in that 'Perfect' LED grow light?

For anyone who doesn't want to bother reading all ​of our drivel above, here's the summary of what we think an ideal LED grow lamp should have, which should help in the decision as to which LED grow light one should buy:

US readers : LED grow lights available in the US... 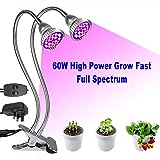 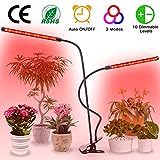 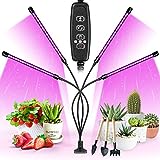 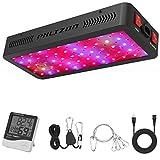 Phlizon 600W LED Plant Grow Light,with Thermometer Humidity...
View on Amazon
We use cookies to ensure that we give you the best experience on our website. If you continue to use this site we will assume that you are happy with it.OkRead more